How you can get involved with the Anagama kiln

In 2015 Dr Robin Wilson a resident artist at the Wytham Studio, together with expert potters from Japan, and artists from Whichford Pottery, built two traditional Anagama kilns in Wytham Woods. Anagama means ‘cave’ and the kiln was constructed to plans based on archaeological investigations of this ancient type of pottery kiln, brought to Japan from China in the fifth century. The project’s patron, Isezaki Jun – a so-called Japanese ‘Living National Treasure’ – brought together potters from Bizen, the oldest of the traditional ceramics centres in Japan, and from Whichford, the largest artisan pottery in Europe. Wytham was chosen for the project because it provides the robust research environment required for the construction of the kilns, the firing process and the production of traditional material objects. 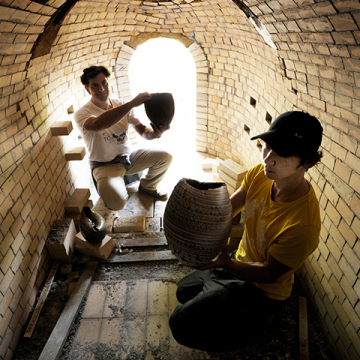 The first kiln was made in the traditional manner from a woven willow tunnel which is covered in hessian and two different fireclay mixes and then fired to burn out the willow interior structure, leaving the baked clay shell as the kiln. Wood-fired and burning constantly at up to 1300°C, the first ‘dragon’ kiln (so called because when lit it resembles a fire-breathing dragon) was first fired in August of 2015 and burned for a constant nine days. The second, larger kiln was constructed using traditional firebricks and was fired in January 2016.

The master potters visiting from Japan brought this ancient and secretive form of pottery and shared this with Dr Wilson and his team, but were also able to learn from the British potters in a collaborative intellectual and physical space. In Japan, potters are akin to pop stars – very rich, famous and powerful people – in contrast to the UK, where pottery is considered a minority craft. The Anagama team hopes the high profile of this project will help build public understanding and appreciation not only of the art that goes into creating this pottery but also of its cultural heritage, history and science.

A wealth of information is provided online and on social media, but ambassadors from the project have also travelled to Japan to meet with potters, ministers, and other influential figures. Back at home, members of the University as well as local organisations and individuals have been encouraged to interact with the Japanese artisans working here on the project. Recently, a potter in residence was hosted by Harris Manchester College.

Researchers from the University of Oxford’s Ruskin School of Fine Art, the Departments of Anthropology and Archaeology, and from other universities, are also part of the project, which is supported by 40 volunteers who help run the operation.

If you would like to volunteer for the project, please complete the form below. 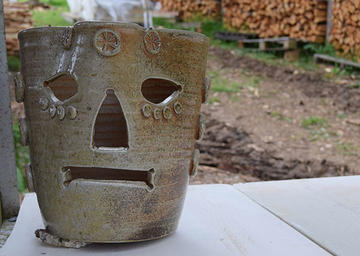