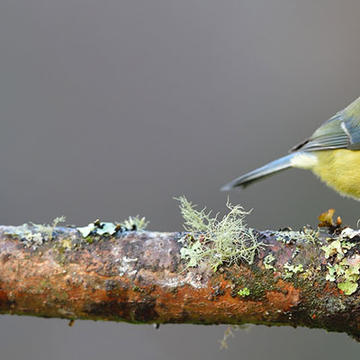 This agile, acrobatic bird derives its genus name, Cyanistes from the Ancient Greek kuanos, meaning “dark blue” and no other British tit has blue in its plumage. Whilst there are around 3.5 million breeding pairs in Britain, they are absent from Orkney and Shetland. Nests are typically made in tree holes or artificial boxes but have also been found in letter boxes and even street lamps. Clutch size is usually around 9-12 eggs but as many as 19 have been recorded. Wytham Wood is home to one of the longest running tit surveys. In 1947, under the direction of David Lack (Edward Grey Institute), student John Gibb erected 200 nests boxes and carried out a weekly winter consensus for the next three years, monitoring both Great and Blue tits. This work is still carried out today and there are now over 1100 nest boxes in the woods that are regularly checked by a team of researchers and volunteers.