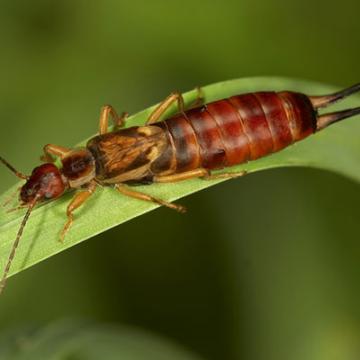 Primarily active at night, the earwig spends daylight hours hiding in crevices in wood or under stones and leaf litter. They are scavengers that eat mostly plant debris, fruit and small insects. The most distinguishable physical feature are the rear cerci (pincers), which are straight in the female and curved in the male. Female earwigs take great care of their offspring, guarding the eggs from predators and licking them to prevent the formation of moulds. Once hatched, this parental care continues until the nymphs reach the second instar.

Their name derives from the Old English “earwicga”, meaning ‘ear creature’. This probably refers to the short leathery forewings which are roughly the shape of a human ear but has led to the mistaken assumption in times past about earwigs entering the ears of sleeping people. The following is taken from Colin Mackenzie’s 1825 book ‘500 Receipts in all he useful and domestic arts’.

“Earwigs maybe destroyed by dropping into the ear a little olive-oil, sweet-oil or oil of almonds; or, it may be enticed out alive, by applying a little apple (for which that insect has a peculiar fondness) on the outside of the ear.”