Woodland Words had a great event on the last Saturday of September. Professor Richard Fortey, President of the Fungus Survey of Oxfordshire and recently retired from the London Natural History Museum, is not only a taxonomic expert but also a famous naturalist, well known for his books and TV programmes. We were privileged that he agreed to contribute to a Woodland Words event, leading a foray in the woods in the morning, and speaking as a writer in the afternoon, with a talk and Q&A session in the Chalet.

For fungi, unlike plants and animals, a complete catalogue of species diversity in a habitat is virtually impossible because, when not reproducing, they grow out of sight in the form of fairly-featureless microscopic threads, a ‘mycelium’, foraging through soil and wood. While DNA can be highly informative, molecular identification needs a lab., so the only time when one can identify fungi in the wood by sight is when they produce spore-launching fruiting bodies such as mushrooms, puffballs and bracket fungi. Most of these appear in early autumn, after rain and before the first frost, the time when mycologists spend most time on fungal forays - expeditions to see what’s there. Fungal fruiting is unpredictable, and there are thousands of species. Most have no common names, and their scientific names may have to be changed from time to time as we learn more about their evolutionary relationships. Experts capable of identifying fungi in the field - in accordance with rapidly evolving taxonomy and changing nomenclature - are an endangered group.

With hard ground, and only a few days of rain after a warm dry September, the wooded area around the Chalet, Upper Seeds and Rough Common looked mycologically unpromising. Even under the big beeches there were none of the red, pink, yellow and purple fruiting bodies of ectomycorrhizal Russula, Laccaria and Lactarius species that mycologists look forward to meeting again at the start of the season. But we had a truly wonderful foray with Professor Fortey and the group of exceptionally keen-eyed and curious participants who brought him their finds on Saturday. Among the species listed below were spectacular earth stars, the huge dryad’s saddle and a giant puffball the size of a human head, past its edible best but still puffing out brown clouds of spores – plus more recondite inhabitants of trees, dead wood and soil, one of which was rare enough to require sending off to a specialist in the genus.

List of species from woodland and grass rides around the Chalet, along the top edge of Upper Seeds and Rough Common

Professor Fortey’s afternoon talk at the Chalet was a riveting account of a career that has spanned the two cultures with phenomenal success. It can be hard to write about science, and about a life in science, in a way that appeals to non-scientific readers – many people, bruised by the two cultures divide experienced at school, fear being bored or patronised. Some scientists present asked for advice. I took away the interesting idea that although there are many excellent books on scientific topics -  a particular example was Ed Yong’s ‘I Contain Multitudes’ that manages to make even microbes gripping - most are by science journalists who have not personally felt the emotions of doing research: the amazement of finding something totally unexpected; collaboration and competition; the sheer terror as a student the first time you presented your work at a big international conference.

Writing about your own life in science, engagingly and honestly, is surely the greatest challenge. I hugely enjoyed Richard’s autobiographical ‘Dry Store Room No.1’, a frank and good-humoured account of life at the Natural History Museum where he worked throughout his scientific career. But he warned that to write such a book requires broad shoulders.

The success of Richard Fortey’s TV programmes and books (listed in the link below) enabled him to buy a four-acre wood in the Chilterns, which is the subject of his most recent publication ‘The Wood for the Trees’. Reading this now, I am captivated - it is like a continuation of our fungus foray, as if I’m walking alongside the author, sharing his sensations of the woodland and effortlessly taking in the scientific knowledge he brings to bear on chance finds. There are ghost orchids as parasites on beech mycorrhiza; woodland spookiness; Chilterns chalk and flints; gold coins of the Atrebates; the local history and human activities that keep the woodland in a permanent state of change. It is also a very engaging personal account of rediscovering the joys of pure curiosity, freed by retirement from professional demands. He is one of the rare nature writers who can communicate cutting-edge scientific knowledge in the voice of a human being you want to spend time with. 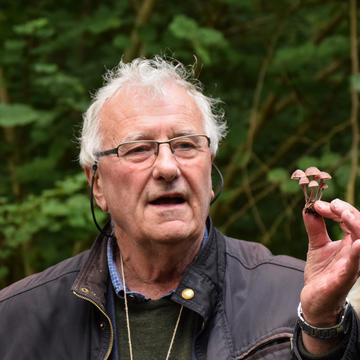 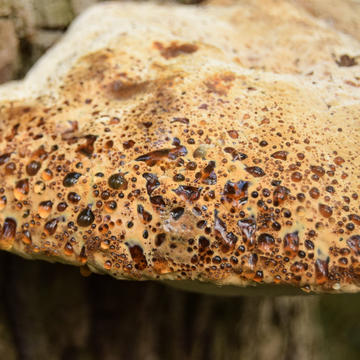