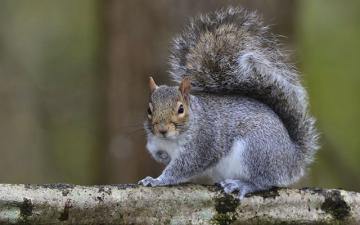 Although a familiar sight, the Grey squirrel is not native. It was introduced to Britain from the Eastern United States in the mid 1870’s and introductions continued until 1915. They have been in Wytham since before the Second World War. Whilst Grey squirrels are mostly grey, some are black and occasionally white individuals are seen. There are often two litters a year, with the young usually weaned at around 10 weeks of age and they reach sexual maturity at 10-12 months old.

The average lifespan is approximately 9 years. Grey squirrels have had a huge impact on our smaller, native Red squirrel (Sciurus vulgaris). Apart from competing for resources, Grey squirrels are most likely acting as hosts for the squirrel pox virus. The virus kills Red squirrels in around two weeks but Grey squirrel have developed antibodies against it which protects them.

Red squirrels are protected under the Wildlife and Countryside Act (1981) and a conservation effort has been launched by a number of organisations in an attempt to safeguard the future of our native squirrel.