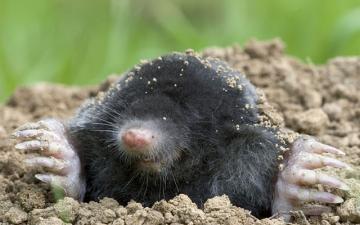 Moles are surprisingly small at about 14cm long and live for around 2.5 years. Males are called boars, females are sows and group of moles is a labour. March marks the beginning of the breeding season, and at this time extra large molehills called kinghills or fortresses (nests) can be seen. One or two litters are born per year, with 3-6 young per litter. These are suckled for around five weeks before progressing to a diet of earthworms, beetles and other insects and occasionally baby mice. Moles can eat up to the equivalent of their own body weight every day. To see them through the winter, moles store earthworms during the autumn. Mole saliva contains a toxin that immobilises rather than kills earthworms, giving a fresh food source for many months.